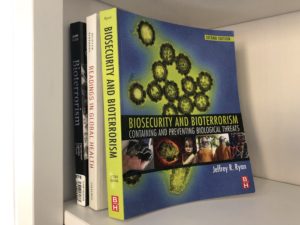 Biosecurity and Bioterrorism: Containing and Preventing Biological Threats, by Jeffrey R. Ryan, is a very comprehensive and multi-faceted book. This was one of the first books that I read when I began learning about global public health and it gave me a great introduction into the sometimes complicated field of bioterrorism.

Dr. Jeffrey Ryan is a retired US Army Lieutenant Colonel and the author of over 40 scientific, peer reviewed journal articles. In addition, he is the author of several books and has coauthored Hazard Mitigation in Emergency Management with Tanveer Islam. As an expert in the field of biosecurity and bioterrorism, “…Dr. Ryan has an extensive background in epidemiology, diagnostics development, clinical trials, and preventative medicine.” (Ryan) At Jacksonville State University, he is the Department Head and an Associate Professor of Emergency Management.

There have been two editions of this book, the first edition was published in 2008 and the second edition was published in 2016. The second edition contains an increased amount of international content and updated information. This book covers an extensive number of potential pathogens, numerous prevention strategies, and the response to bioterror incidents. Several strategies that governments and other industries could use to become prepared for and respond to biological threats are also outlined.

Dr. Ryan’s book introduces readers to the potentially devastating effects that a bioterror incident could have on millions of people, our economy, and modern societies. It explains the dire importance of planning and strategizing for a bioterror attack, due to the severe underpreparedness of modern societies for biological terror attacks.

At over 360 pages, this book covers a large amount of information and topics including the history of biowarfare, the numerous types of pathogens that could be used in a bioterror attack, and how these pathogens affect human health. The book also explains the classifications of these pathogens (Category A, Category B, Category C), which are ranked in order of highest to lowest security risk; the response plans and detection systems that are already in place, and the response at local and state level. At the end of the book, the future of biosecurity and how the threats of a biological attack will change over time is discussed, as well. Several case studies of historical outbreaks around the world were also described throughout the book.

This is a great book for anyone interested in either bioterrorism, biosecurity, or the history of biowarfare. Given how comprehensive it is, it is a good first book to read as a primer on the subject. The layout of the book is somewhat similar to a course textbook. This is sometimes beneficial, as that makes it easy to navigate. However, it does not read like a novel. But given the seriousness of the topic and the accuracy required, I don’t see this as a shortcoming.

I encourage any of you to look into this book further in the link below: