As of yesterday, New York City has declared a public health emergency in response to a widespread measles outbreak in Brooklyn. Measles is a viral infection that can be very dangerous for small children, but has been preventable with a vaccine since the 1960s. Common measles symptoms include a cough, runny nose, fever, and a red skin rash. Measles symptoms do not appear until 10 to 14 days after the initial exposure, which allows for easy transmission of the virus during the initial days of infection.

In New York City, the outbreak is primarily occurring in the ultra-orthodox Jewish communities of Brooklyn, including Williamsburg. During a news conference on Tuesday, Mayor de Blasio stated that the current outbreak “is the epicenter of a measles outbreak that is very, very troubling and must be dealt with immediately.”

Due to this outbreak being the largest in New York City in decades, the government has called for all unvaccinated inhabitants of select zip codes of Brooklyn to receive the measles vaccine immediately. Although measles is highly contagious, the vaccination against it is around 97% effective.

Individuals who do not comply with these regulations will be issued violations and possibly fined for sums up to $1,000. Mayor de Blasio added that those who are not able to pay for the vaccine will receive it for a lower price or for free.

On Monday, the NYC Health Department ordered all Jewish schools in Brooklyn to exclude any students who are not currently vaccinated against measles. Should yeshivas not comply with these orders, they could face fines and possibly being shut down by the government.

According to officials, the outbreak first started after an unvaccinated child became infected with measles after visiting Israel, which is also dealing with its own far-reaching measles outbreak at the moment.

Since last October, there have been 285 cases of measles in Brooklyn and Queens. In the United States, there have been 465 measles cases confirmed in 19 states just in 2019, according to the Center for Disease Control. The current outbreak is the second largest since the United States declared the eradication of the disease almost twenty years ago. 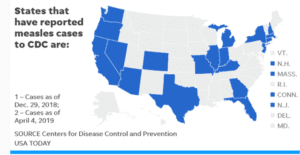 The outbreak in New York City is amid the rising number of cases of highly contagious childhood diseases that were almost entirely eradicated worldwide a couple of decades ago. Measles outbreaks have now reached one-third of the country, with 78 new measles cases reported nationwide since last week.

Many of the measles outbreaks are a result of the growing movement against vaccines, rooted in a fear that vaccines are unhealthy and dangerous, including unfounded fears that certain vaccines can cause autism, although the CDC has reported that there are no scientifically proven disadvantages or links to autism as a result of using vaccines. Mayor de Blasio stated that “There’s no question that vaccines are safe, effective and life-saving. It does interconnect with the anti-vaxx movement that is not just in the community, it’s national and it’s causing lots of problems.”

The New York City measles outbreak is part of a worldwide increase in confirmed easily preventable diseases and a decrease in the number of individuals getting vaccinated each year, due to the growing anti-vaccine movement. As Mayor de Blasio said, “We cannot allow this dangerous disease to make a comeback here in New York City. We have to stop it now. We have a situation now where children are in danger. We have to take this seriously.”