The history of public health in Germany is inseparably intertwined with German historic events and public figures. I was able to learn about it from two experts in this field: Prof. Dr. Manfred Wildner and his colleague Dr. Herbert Zöllner, who are both based in Munich, Germany.

Professor Wildner and Dr. Zöllner are based in Munich, Germany.

Q: Public health in Germany has a long and interesting history. From its beginning with one of the founding fathers of public health, the innovative and visionary Max von Pettenkofer, to the Weimar Republic, to its role in the atrocities of the Nazi period, its resurrection during the formation of the European Union, the impact of the cold war, and the division and reunification of Germany, public health is firmly entangled with history. Would you mind giving me some insight into how historical events shaped public health in Germany? 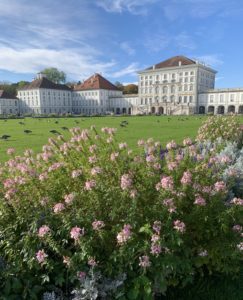 Prof. Wildner: Since you mentioned Max von Pettenkofer, he was indeed a very important historic figure in the field of public health and for the city of Munich. He actually had his 200th birthday last year. Did you know that the tap water in Munich comes from the Alps? Von Pettenkofer convinced the city council at the time to build the infrastructure for clean water supply and the sewers, which was a “billion-dollar investment” at the time.

He did the right things, like focusing on water and sewer sanitation. But there were a couple of things that he didn’t grasp at the time. He was trained as a chemist and a pharmacist, and although he did not deny that microbes exist, he was unable to figure out what caused cholera. This was ultimately determined by Robert Koch, after whom the Robert Koch Institute in Berlin is named.

Germany was quite early in organizing its health care system. It was in 1883 that the first health care legislation was signed into effect by Count Otto von Bismarck. He initially refused to sign it, three times in a row. There was actually a fight between Rudolf Virchow who was a leftist, socialist politician, and Otto von Bismarck, who was very conservative. The government tried to suppress all the leftist ideas like health insurance. But they wanted to avoid a revolution and the key way to that was to address social issues. It was for that reason that they passed health care legislation. Since the government didn’t have any money to fund this new measure with, they made people pay into a social insurance fund. This stemmed from an old German tradition among professional groups; when you become a member of the group, you had to pay into a social fund and your professional organization would take care of you and your family if you became sick. The government leveraged this tradition when rolling out the new health care system.

If you look at other countries they will each have their own traditions that inform their health care systems, rooted in their historical circumstances. At that time, public health was really thriving in Germany.

Pettenkofer’s system did not entirely disappear after the war. It stopped in Germany but continued in the US. Remember that Pettenkofer was a natural scientist, trained in chemistry and connected to medicine. His successors also were social scientists. They were often Jewish professors, who were forced to leave Germany. These scientists brought their ideas to the US, where they thrived. But while the academic strand of Pettenkofer’s system stopped in Germany, the natural science angle of public health kept going here, only with less force behind it than before.

After the war, only a rudimentary system was left, and the universities did not have any resources to fund professorships for public health. Consequently, there was little in the way of a postwar public debate about the role that public health, ethics and race had played. While that was fine in the short term, it caused problems later on. You had a whole strand of science which wasn’t being taught and in which no research was being conducted. As a result, when during the subsequent period of European unification, Europe required data in certain public health areas, Germany was unable to deliver. It was at that late point – in the 1980s and 90s – that public health was finally rediscovered in Germany.

I was one of the scholars who participated in this rediscovery during that period. I went to the US and got my training and then came back to Germany, where I worked on the reinstatement of Germany’s modern public health programs. These had been exported from Germany at the beginning of the 20th century to the US; and now they were coming back – re-imported from the US because the science had evolved during its absence from Germany.

Q: What happened to public health during the Cold War? 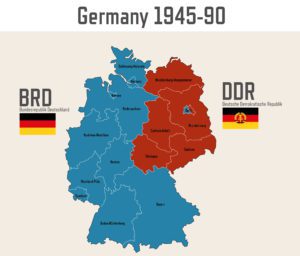 Germany was divided during the Cold War. Photo by Shutterstock/Benny Thaibert

Prof. Wildner: Germany was a frontline country during the Cold War. That was a time of political and ideological battles. How did those battles affect public health? As you might expect, this competition resulted in both sides focusing on developing their health care systems. It was a competition of systems. Whatever the Socialist system was achieving, the West wanted to top. That was actually one positive effect of the competition. But public health was unfortunately left out of this competition.

Dr. Zöllner: The Soviet Union suffered quite a bit during the ‘70s. Life expectancy decreased each year by 1%. It was not only the economy, but also the management of the health system. It got so bad that the Soviet Union stopped publishing health statistics. I started making fun of my Soviet counterparts for apparently having beaten mortality – and guess what? Shortly after that, they published health statistics again! You see, public health is really also about politics!

In the West, part of the problem in public health grew out of the ‘68 Movement. The 68’ers believed that system knowledge was system terrorism. They wanted to decentralize everything – which is of course a terrible thing to do in the public health space.

Q: Were there differences between the systems in West and East Germany? How was the transition handled during reunification?

Dr. Zöllner: When Germany was divided, public health in the GDR had sanitary-epidemiological stations who were able to identify major health risks. It worked marvelously, except if they really wanted to intervene, they could not, because the economy had higher priority and they did not have the funds.

After reunification, this public health system was lost. The West took over; the East German health system was shut down virtually overnight. There was no transition or any exchange of ideas. The West declared also, that the Eastern system of policlinics was a Socialist idea; but the idea actually preexisted Socialism, going back before even Hitler. It was an old German idea; that different physicians, nurses and therapists would work together. Following the war, that idea was considered in the West to be fascist and was discontinued.

Prof. Wildner: That was a major issue. People such as myself, who are doctors working for governments, were rare in the West. This is because the medical profession is a free profession, and doctors do not necessarily want to work for the government. Also, patients mistrusted government and considered doctors to be their advocates; this is a democratic-right based approach. That was different in East Germany, which had a government-run health care system.

Q: Public health today is an interdisciplinary science. When it was stopped in Germany after the Nazi era, you said only natural science aspects were continued. Would you say that there are still consequences today due to the fact that the discipline had to be “re-imported”? 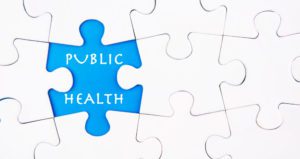 Public Health interlinks with many other fields. Picture by Shutterstock

Prof. Wildner: We now have Master of Public Health programs in Germany, but we have a divide between what we call new and old public health. New public health encompasses the new methods of epidemiology and social sciences. Old public health comprises the administration of infectious disease control and hygiene, which we did not unite with the new public health. And that is our main challenge now.

Q: This was very interesting! Thank you both so very much for taking the time to speak with me!

Prof. Wildner: You are welcome!

Dr. Zöllner: Pleasure to speak with you!